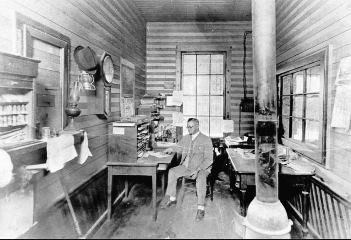 Last week, when we began our visit to the prominent past of what is now Jonesboro Heights, we mentioned Jonesboro’s origins as a “railroad town.” C.H. Russell (pictured) held court in the train depot during the 1920s, when the Western Railroad passed through in its journeys between Egypt and Fayetteville, and eventually Wilmington.

Two other popular gathering places were O’Connell’s Grocery on Main Street, where Floyd O’Connell was the proprietor, and the Jonesboro Lee Drug Store. This Main Street mainstay. remained in business for roughly 70 years, from the 1920s to the 1990s. This picture is from the 1940s. The 1940s were also a powerfully moving time for the Jonesboro Heights Baptist Church. Historical records suggest the church was among the first to be started in Jonesboro and this is the physical structure of the church from 1889 to 1951. In World War II, 48 church members served in the military. They all returned home from the war, safe and unharmed. A true blessing! The Center Theater was a popular entertainment spot in Jonesboro during movies’ heyday. The theater flourished with a steady lineup of movies and events. Here’s a very long line of mostly young patrons waiting to enter the theater in 1952.

Big-time retail also made its mark in the Jonesboro section in the early 1960s. This was the the time when large national and regional chains began leaving downtown areas, for large open spaces. The Kendale Shopping Center was the first of its kind in Lee County, opening in 1962 with anchor tenants such as A&P Grocery, Mann’s Drug and Mack’s. Kendale was one of the largest free-standing shopping complexes in the region in its early days. The shopping center was recently sold, with at least one of the two of the three building reportedly retaining a retail focus. The third building is now reconstructed and the brand new home of the MINA Charter School of Lee County.