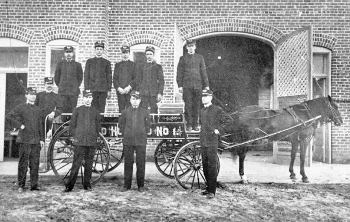 It’s that time of year when we normally begin thinking about cows, horses and other livestock that are commonplace at the annual Lee County Regional Fair. Of course in non-pandemic years, the fair is made possible in large part thanks to the Sanford Lions Club, who assumed responsibility for operating the fair all the way back in 1935. While the fair is on hiatus for a year, let’s turn the pages and get a better idea of the role that horses played in the area, back in earlier times. We’ll begin this “equine adventure” with a visit at the top of the page to another group of civic-minded folks, the Sanford Hose Company No. 1., standing in front of city hall in 1912. Before combustible engines became common a little over a century ago, horses were the main form of transportation for fire fighters everywhere. Our next picture is from around the same time. It’s J.R. Kelly’s wagon repair business. This shop was on Charlotte Street, pretty much right across the street from where the Love’s Grocery Store stands today. Of course, a majority of the horses in Lee County a century or more ago were out in the country, on the farms. Agriculture was the primary driver of our economy and we see two examples here. The first picture is also from around 1900 and its horses & wagons on Trade Street in Jonesboro are most likely on their way to Hasty Campbell’s cotton gin with the results of their hard work in the cotton fields. In addition to cotton, wheat was another popular crop in the area. Here are horses and wagons playing a role in getting grain milled and flour shipped out from the Seaboard Milling Company. There’s no horse in the next picture, but with a close look at the lower right you can see why we included it. This is the McIntosh Store on Wicker Street in 1916. In front of the store is what we believe may be the last public water trough in Sanford. As cars became more common, there was less need for horses, mules and the water supply that kept them hydrated on their travels around town and across the county.

Finally, there’s a very good chance you’ll have no idea where our last picture was taken, even though its location is a Sanford landmark. This business sold buggies, wagons and harnesses and was operated by entrepreneurs named Wilkins and Lashley. In 1924, after the buggy business lost its horsepower, the Wilkins-Ricks Company built a large 6-story structure on this very spot; the building we now know as the Wilrik Hotel Apartments!