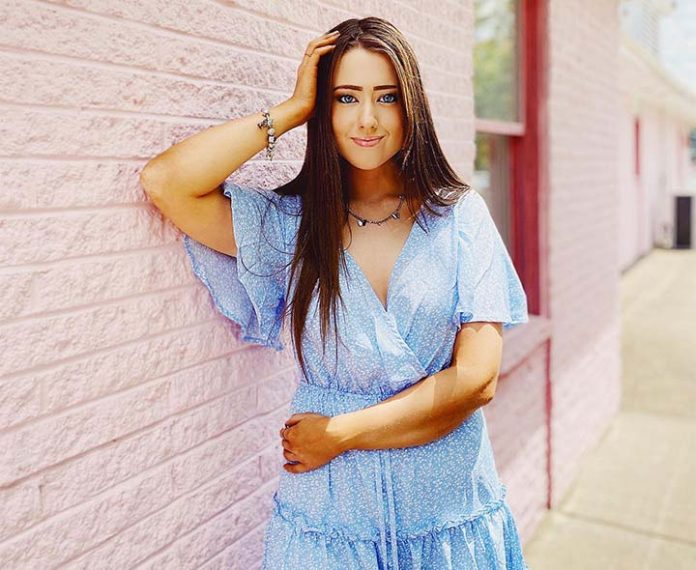 This Friday’s Welcome to Sanford Artist of the Week is local musician Kennedy Clayton. Kennedy is a talented singer/songwriter who sings Contemporary Christian Music in her original songs, covers, and on the worship team at Life Springs Church in Sanford.

Kennedy began her journey into music at a young age, performing in Summer shows at the Temple Theater throughout her childhood and into high school. She was first inspired to perform and create Christian music after overcoming a six year battle with multiple illnesses related to PANDAS. Through her music, she aims to give her thanks to God, and to inspire others.

Music, especially bluegrass music, runs deep in Kennedy’s family history. Kennedy’s great grandfather was good friends with bluegrass legend Earl Scruggs, even going with him to Nashville where he was first discovered. When Kennedy was 15, she was invited to Nashville to write and record her first single. She wrote her single, “He Let the Light In,” with the help of notable musicians Nicole Witt, Christa Wells, and Steve Wilson. Last year, she worked with fellow Christian Musician Ben Shive to release her second single, “He’s Not Finished Yet.”

Most recently, she wrote her latest single, “Out of My Hands,” with the help of Christa Wells and Steve Wilson. When writing Out of My Hands, Kennedy reached out to her followers to incorporate their faith experiences into the song. Out of My Hands was released last month, make sure to watch the video below to hear it!

Make sure to follow Kennedy Clayton Music on Facebook, and visit her Youtube channel to listen to more of her music. Her music is also available on Spotify and Apple music.

To learn more about PANDAS, the illness which Kennedy battled for six years as a child which affects many children annually, visit pandasnetwork.org.
To contact Kennedy for speaking and musical engagements please email kennedyclaytonmusic@outlook.com.