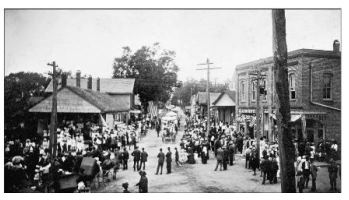 The Fourth of July is often thought of a time for picnics, parades and most of all, celebrations.  It’s our country’s birthday, after all! So this week, we thought we’d look back at a collection of celebrations and community events.

In the upper left, we see how the area celebrated July 4 in 1909.  This parade took place on Trade Street – the main commerce road – in Jonesboro at the time. The J. Alton McIver Building on the right may look 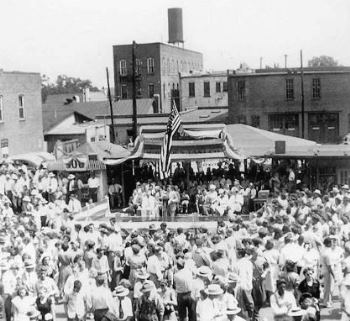 Before this space to the right was used to build a J.C. Penney store in the 1950s, Steele Street was a popular destination for community celebrations, meetings and events, including an activity to celebrate the end of World War II in 1945. 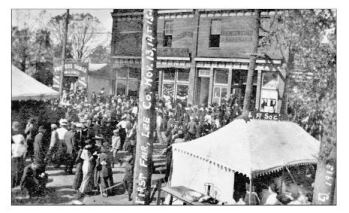 How’s this for a community celebration?  It’s the first Lee County Fair, which took place in downtown Sanford near the railroad house, from Nov 13 through 15, in 1913. The fair was a yearly event until 1919 and then became more sporadic until the Sanford Lions Club assumed leadership in 1935 (and continue in that role today). 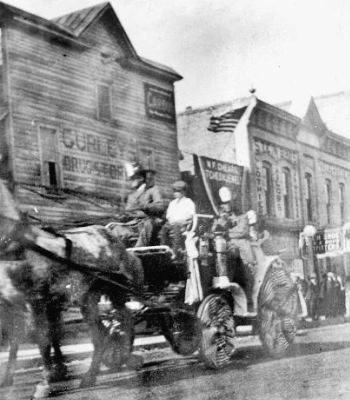 The mark of a great parade at the turn of the last century, was the presence of one or more horse-drawn fire wagons. In this parade on Moore Street from over 100 years ago you can see the Gurley Drug Store and the Stein Brothers building in the distance.

Finally … here’s a community gathering of a different sort. 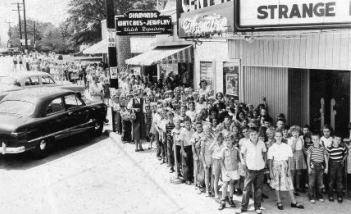 A long line of young people are standing outside the Center Theater in 1952, waiting for entrance to see a popular movie. Judging by the part of the movie sign we can read, it’s possible the kids were waiting to see a scary movie called The Strange Door, starring Boris Karloff. The line stretches for as far as we can see!